Home Digital Trends How Artificial Intelligence Works & How To Implement It

How Artificial Intelligence Works & How To Implement It

37% of businesses have implemented some form of artificial intelligence (AI) in the workplace.

Even though AI was once considered science fiction, it is becoming increasingly common in the world of business and tech.

Despite its growth, it still might be hard to grasp how exactly AI works.

In this article, we will cover the basics of AI, what types of it exist and how you can implement it in your business.

Artificial intelligence is a branch of computer science that strives to simulate and replicate human intelligence.

AI combines vast amounts of data with fast processes and superior algorithms. This makes it possible for systems to learn from patterns, automatically.

In a nutshell, AI tech is making machines intelligent. But how?

Looking to add AI to your website? Request a quote

Stuart Russel and Peter Norvig defined AI in their book, Artificial Intelligence: A Modern Approach, by stating that AI tech is “the study of agents that receive percepts from the environment and perform actions.”

The four approaches to AI tech, as defined by them, are:

Arising from these approaches, artificial intelligence most frequently gets categorized into the following concepts:

Alternatively, we can consider the definition proposed by Michigan State University’s Arend Hintze, who outlined the four fundamental types of AI (in this article, we will look into and discuss three of these as they are of relevance to our topic):

Looking to grow your brand online? Let us give you ideas

Check out this video explaining the basics of self-learning AI, as evidenced by Google Deep Mind:

Some of the major subfields of AI tech, that also present methodological and theoretical grounds, are: 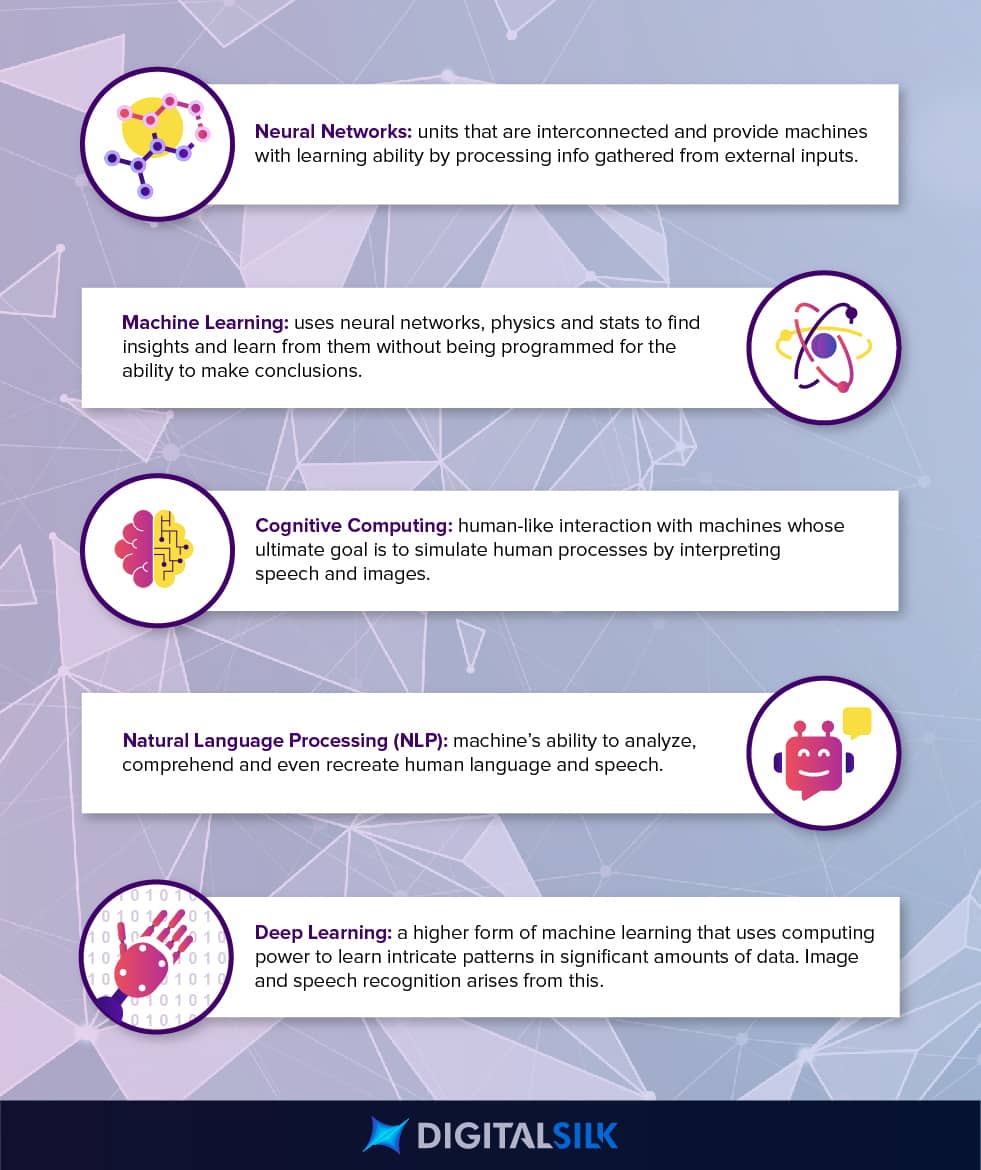 How Is AI Programmed?

According to Existek, five major coding languages used in AI development are:

These are the most agile, capabilities-rich languages that are the backbone of any software or app catering to the business use of AI technology.

Each, of course, has certain drawbacks and advantages when it comes to coding AI tech. Choosing one over the other mainly depends non the functionalities you’d like your AI system to have.

C++ is excellent for resolving complex AI problems and finding permanent solutions for them.

This language is packed with tools for programming and library functions that enable AI systems to reach their full potential.

As it provides full support for object-oriented principles, it has shown itself useful with processing organized data.

However, C++’s weakness is that multitasking isn’t its forte. Also, it is suitable for the implementation of the base of specific systems and algorithms.

New developers may have a hard time coding AI with C++, as it is prominently in favor of the bottom-up approach.

Java’s main advantage is the fact that this language is very easy to implement on different platforms.

Its simplistic use has made it very powerful and multi-purposeful – it even makes debugging easy.

Java has an automatic memory manager that makes the work of a developer easier.

Among downsides is the fact that Java is slow – slower than C++, for instance, as its execution can be kind of sluggish and takes more response time.

Despite it being portable, that won’t help on older platforms, where Java requires software and hardware changes for it to work properly.

Lisp is quite fast and very efficient – especially in coding, where it is supported by compilers instead of interpreters.

This AI tech programming language has one great advantage over the others – it has an automatic memory manager invented for it.

However, Lisp is a rarity – there aren’t many developers acquainted with programming in this language.

Widely used in AI tech coding, Python has a vast diversity of tools and libraries and it supports testing of algorithms, without there being a need to implement them first.

This language can increase the overall productivity of a developer by being supportive of object-oriented design. Also, this program is fast – faster, in fact, than Java and C++.

If we were to name a few downsides, then it might be the difficulty of developers accommodating to the new syntax for AI tech programming.

It also works with the help of an interpreter. That makes execution slower in artificial intelligence development, compared to that of C++ and Java.

One big obstacle is coding AI tech for mobile computing, as its language makes it unstable for mobile.

With its list of essential tree-based data structures, Prolog has certain advantages over the other programs on this list, such as high efficiency for quick prototyping for AI programs to be released.

Prolog hasn’t been standardized yet. This, along with some features being different in implementation, can increase the amount of work for developers.

How Long Does It Take To Code And Program AI?

Of course, the question of how long it takes to code for artificial intelligence depends on obvious factors:

Before tackling AI coding, one must have a basic understanding of linear algebra, matrix algebra, variable calculus and statistics.

Taking all the prerequisite knowledge into account, Hackernoon estimates that it would take two hours for Data Scientists, Software engineers and domain experts to leverage AI and go from a working idea to a “dirty prototype.”

For the “average Joe,” the forecast is, of course, radically less optimistic.

According to Mike West, “Machine Learning Evangelist,” for entry-level AI coders and programmers, studying 3-4 hours a day could help attain them the required knowledge of AI coding in less than a year.

Looking to grow your brand online? Let us give you ideas

Everyone willing to dab into AI bandwagon has likely asked themselves the same question: are there any open-source, free AI tech templates?

Luckily – yes! And, thankfully, they are great time-savers, too.

Let’s take a look at the following five artificial intelligence tools and frameworks that are suggested by OpenSourceForU.

TensorFlow is an open-source software library that was developed and used by Google Brain Team researchers.

It has a flexible architecture allowing developers to “deploy computation to one or more CPUs in a desktop, server or mobile device with a single API,” although this library itself provides multiple APIs.

The lowest-tier API gives total programming control, while the higher-level APIs alleviate repetitive tasks that need to be undertaken among different users.

Caffe is a framework for creating deep learning systems. It was made to be speedy and modular, as well as very expressive in technical terms.

It was developed by the Berkeley AI research team and its primary focus are networks applied to computer vision.

By design, this tool buoys innovation and application because its models are configured without hard coding.

It has a big community of users as it backs academic research, startups and applications in multimedia.

It contains Java’s class library (with a very small number of basic classes) and with its easyNeurons tool, it can facilitate the creation and training of neural networks.

This tool also has its own support for image recognition.

This framework develops systems that are capable of machine learning using Big Data.

SystemML was created by IBM and it’s renowned for its flexibility and scalability.

It allows multiple execution modes, customization of algorithms and optimization based on data and cluster characteristics.

The additional levels of deep learning deployed with this system include GPU capabilities, importing and running neural networks and more.

Torch is an open-source machine learning library based on LuaJIT programming language. It boasts a large number of algorithms and flexible tensors for indexing, resizing, cloning and sharing storage, in addition to other features.

With a top-notch interface, linear algebra routines, neural network models, efficient GPU support and embeddable nature, Torch is used by the Facebook AI Research Group, IBM and Yandex, among others.

Its subset, PyTorch, is an open-source machine learning library for Python and can be used for natural language processing.

How Long Does It Take To Build A Chatbot Using AI And How Is It Done?

According to resources such as ChatBotsMagazine, you can use the above frameworks like TensorFlow to build fully functioning AI chatbots.

They can be interacted with via voice or text functions and are most commonly used in retail customer service or for troubleshooting technical issues.

ChatBotsMagazine lists four priority steps when setting out to create a chatbot:

Some of the most advanced platforms that are designed to help developers build chatbots are:

So how long does it take to build a chatbot?

RubyGarage argues that, depending on the scope of work, creating a chatbot can take from 40 to 160 hours.

Take a look at this helpful video by edureka on how to create an AI chatbot using TensorFlow ( listed above as one of the preferred methods of AI-building).

How To Create An Artificial Intelligence Program For Speech Recognition

TowardsDataScience’s Admond Lee understands that it is the speed that will make voice and speech-enabled products like Google Alexa the thing of the future.

He gives a compelling case in favor of creating your own voice-controlled AI tech with the help of the aforementioned Python programming language and Google Speech Recognition API.

He even provided the source code that can be found here!

Noting that there are other Speech Recognition APIs out there, there are also valuable, such as:

Lee argues that Google API has a default key that is hard-coded into the SpeechRecognition library.

So how much time does it take?

According to Nickolay Shmyrev, CMUSphinx developer, coding a speech recognition system can take a few months.

You can follow Lee’s thorough instruction on building a voice recognition AI almost from scratch at this location.

Have a look at his own video showcasing the voice recognition demo he built on his own:

All in all, artificial intelligence has the power to engage customers, improve user experience and ultimately help businesses boost their revenue while integrating the latest technology.

But pre-existing platforms can help to enact artificial intelligence solutions for businesses. For instance, successful chatbots can be built using:

And speech recognition can be created with the following programs:

Whether you decide to utilize chatbots, voice recognition, or incorporate a different form of AI, artificial intelligence has the power to put your brand ahead of the competition and build a repeat customer base that will rely on you for years to come.

Ready To Build An AI System?Request A QuoteTell us about your project and let our experts give you recommendations.